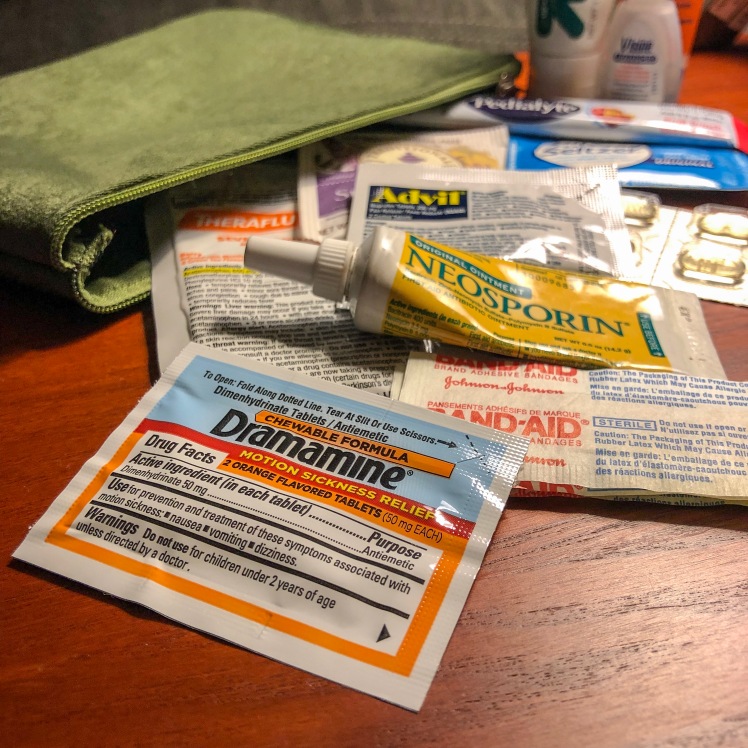 Several friends and family have asked me, “What is something you never leave home without?” Along with my passport, phone and wallet, I never leave home without my travel medicine kit. Yes, you can likely buy over the counter medicine at your destination but the last thing you want to do while you’re ill is search for an open pharmacy in a language you might not know. I’ve been a carry-on traveler for several years and my medicine kit hardly takes up any space.

I promise I am not a hypochondriac. I keep it simple but diverse enough to cover a few of the sudden illnesses that have caught me off guard in the past. I am not necessarily promoting name brands but these are my go-to items I take on every trip.

*For prescription medication, it’s important to double check if it’s an illegal substance in the country you’ll be visiting.

What would you add to this list? Tell me in the comments!

Note – If you want to know why I started packing specific items and you’re up for a chuckle at my expense, feel free to keep reading.

I volunteered to spend 10 days with Habitat for Humanity in Comanesti, Romania and other than Olympic gymnast Nadia Comaneci, I knew very little about the country. I soon discovered the countryside was full of kind people with a love for delicious meat and polenta. I wasn’t accustomed to eating meat daily, let alone multiple times a day. As the days went on, I was realizing I wasn’t feeling too well. I typically get a little bit of traveler’s constipation but this was getting concerning. I was approaching…the one week mark when my group and I went out to dinner to celebrate a birthday. I actually reached the point where I couldn’t eat anymore. I finally had to say something to my group leader. She didn’t speak Romanian so she was asking our driver to find a pharmacy in English. It was really difficult to find one in a remote part of the country! I was crouched in the back of the mini bus and couldn’t even walk up to the pharmacy once we found an open one. To make matters more embarrassing, my group leader simply passed my Romanian laxatives from the front of the bus! It felt like everyone got their hands on my medicine before it physically got to me. It didn’t matter, I had to trust this product was going to work. They were some herbal capsules and I figured out what the recommended dosage was. 2 capsules, nothing. 4, nothing. It went on and on until I reached 8 capsules and then I finally felt like a human being again. I know 8 capsules sounds like the results could have been comical and painful, but it wasn’t. That medicine was just too weak for the severity of my condition. A few lessons learned for sure.

My train arrived at Sirkeci Station in Istanbul when I felt a sharp pain in my lower back. I assumed it was sore from being on a long train ride in addition to the manual labor I had done with Habitat for Humanity a few days before. I was looking forward to treating myself to a wonderful Turkish Bath. It was in the train station restroom that I realized the most annoying accident that could happen to a woman; I had unexpectedly started my cycle and stained myself. Ok, no big deal. I’ll just go out and buy a pack at a nearby store. I didn’t want to carry my large backpack everywhere so I hoped my hotel would let me check in early. Unfortunately, my room wasn’t ready yet and it wouldn’t be for a few more hours. The hotel staff at the front desk were all male and at that time I did not want to ask them for help. I don’t need help, I’ve got this, so I thought. I was at least able to drop off my backpack. Shop after shop, I wasn’t finding ANYTHING. I was starting to panic. Perhaps it was because I was in the old part of the city that I couldn’t find any feminine products. I just wanted to change and enjoy the rest of my stay! Finally, I stumbled upon a gas station and hoped this would be my last stop. I could have shouted for joy, they had what I needed! Granted, it wasn’t a full pack but I didn’t care what it cost and bought as many as I thought I would get me through my time there. After my feelings of relief came over me, feelings of disappointment quickly followed. I realized I would not be able to take that Turkish Bath after all but at least I have a funny story to share and it’s just another reason for me to return to Istanbul one day.

My boyfriend and I had just landed in Dublin, Ireland but I was already feeling like I was coming down with a cold. Upon arrival, our Airbnb host offered to give us a tour of his neighborhood, but I was afraid I would get worse if I pushed myself too hard on the first day. I decided to stay behind, take two Advil and have a nap. I didn’t mean for it to turn into a long nap, but I told myself that I needed it, especially if I was going to be up early in the morning for our day trip to Northern Ireland. While I was napping, my boyfriend was having a grand ole time getting to know the immediate area like a local and having a few drinks at a nearby pub. He was excited for another day of the same thing so you could imagine he was extremely annoyed with me when I reminded him of our long day trip that awaited us in a few hours.

I’m not thrilled to go on bus tours but if I’m short on time and the tour is cost efficient, then I’ll choose the tour over exploring on our own. We were up around 5am and we were both quite unhappy. He had spent a fantastic night drinking with locals and being up that early was the last thing he wanted to do. I was also unhappy and regretting my decision to take this tour because I woke up feeling even worse! I had a full blown flu. It was so cold and rainy and I just wanted to sleep in. As we approached the meeting spot for our tour, I also realized I hadn’t packed a single thing for the road! Not food, not medicine or even water. Plus I’m also quite prone to motion sickness. This day was off to a terrible start and this 15 hour day already felt as if it were never going to end.

Luckily for both of us, the bus stopped at a gas station about an hour into the trip. Suddenly, there was hope this day could be salvaged! We purchased everything we needed and I was ecstatic to find severe flu medicine! Once we were fed and I was fully medicated, our moods made a complete 180 and we managed to “start over”. The rest of the day was salvaged and my boyfriend unexpectedly proposed to me later that afternoon! Had it not been for that gas station stop, I would be telling a very different tale right now.